The snare batter and resonant heads are seated and tuned according to the method outlined in the previous sections. The pitching of the snare batter head under normal conditions can be anywhere depending on the player’s choice. As a rule of thumb, I look for a pitch which is not an octave or harmonic of one of the toms so as to avoid unnecessary sympathetic resonance.
The batter tuning procedure is the same as the seating and tuning procedure advocated above.
Resonant (bottom) Head 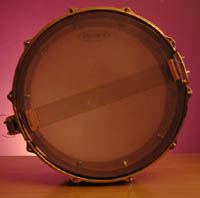 The resonant head of a snare drum is much thinner than a batter side head – do not mix them up! This thin-ness is the key to a good snare sound. Because of the [usually] higher pitched nature of the drum and also with the addition of the snare cables there is a degree of ‘choking’ inherent in a snare. Choking occurs where conditions where the drum is tuned so tightly that it resonates inefficiently, this is acceptable and desirable in a resonant head of a snare drum.

If a snare resonant head were to be allowed to resonate freely, the snare wires would be constantly buzzing. I recommend that you tighten the snare side head high, or as one of the regulars on the RMMP drumming newsgroup said ‘until it’s screaming for its lawyer’.

To compensate for the dip in the bearing edge on the snare side to accommodate the snare bed, slacken off each of the tension rods on either side of the snare wires a further ¼ turn, this helps the snares sit lower against the drum skin and will help alleviate buzz. I have heard arguments to loosen also so the best advice is to adjust it until you get a sound that suits you.

Basically that’s it for the tonal tuning of the snare drum, however there is the small matter of adjusting those wires to (A) make them sound great and (B) minimise their rattling caused by other drums or instruments…

Put the snare throwoff in the ‘off’ position and turn the strainer adjustment to about 75% loosened. Fix the snare wires to the throwoff & butt using cables or strips as supplied with the drum. Ensure that the snares hang cleanly away from the resonant head.

Engage the throwoff and adjust the tension so that the snares sound ‘mushy’. Keep tapping the centre of the drum and adjust the strainer by tiny increments until you hear it snapping cleanly against the head. Stop! This should still be just above ‘mushy’. The largest ‘killer’ of snare drum sounds is over tightening the snare strainer to try and offset unwanted vibrations.

Lets take a second to think about this. We have an instrument that works [in part] using the principles of resonance. We then go and put a really thin, ultra-sensitive drum head on this particular drum, ostensibly to help it become more sensitive, we then add some curly wires designed to vibrate against the ultra-sensitive head and then we complain when they start to do exactly what they are intended to do – LOL

The final consideration is that of ‘sympathetic resonance’. This occurs when the fundamental tuned tone of one drum shares pitch with the fundamental or harmonic of another drum, another instrument or other sound.

This is not normally a difficulty with rack toms unless you are in the studio, however with your snare drum it’s a different beast.

Over-tightening the snare wires will help to reduce resonances sympathetic to other sources but after a point it starts to make the drum lifeless and may give difficulty for snare rolls. On the other hand, under-tightening the snares will give you a drum with annoying buzzes from itself and from the drums and instruments around it -clearly the whole question that you should be considering is one of balance.

The BAD news is that this resonance is impossible to get rid of totally so don’t go worrying about trying to eliminate it totally or you will be in for a whole lot of headache for no potential gain.

The GOOD news is that it is normally masked at playing volume by the sounds of the other drums in your set and the sound of the other musicians who surround you. Think about it, apart from practise, how often do you really proparly hear your drums on their own?

If you do find that a particular drum in your set is triggering the snare buzz, then that issomething that you can do tweak, however you should try to eliminate it by changing the pitch of the snare and not the toms. Toms generally are tuned to relative pitches with matched sustains, you don’t want to adjust each tom. Re-adjusting the tension on the snare wires also works within the parameters discussed above, but if you have set the snare up independently, this is drastic and you should re-tune the pitch of the snare batter head away from the offending frequency or harmonic that is causing the problem.