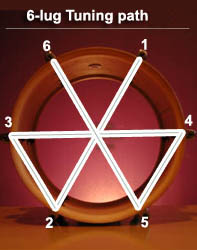 The resonant head is appropriately named according to its function.  Although not a head that is struck, it is critical to how your drums sound and the tuning of the resonant head affects pitch, duration & movement or pitch bend of the sound.

Rest the drum with the existing head surface (in this case the batter head you have just fitted) face down on a small cloth or tissue when seating & tuning the resonant head, this stops the heads freely resonating together when you are working solely with one of them.  Don’t push the pre-existing head too much into the drum with this damping either, it should still be almost flat.  Pushing the head into the drum will affect the internal volume of the drum and therefore the overall pitch and fundamental because of changes in volume and air resonance.

The resonant head is fitted in exactly the same manner as the batter head and all the steps outlined above in seating should be followed.  The real decisions come when you have to decide upon the relationship between the two heads which will defines the movement and duration of your drum’s sound and decay.

Both heads can be tuned to identical notes, this means that the vibrations moving through the column of air inside the cylinder are reflected back off the resonant head at the same frequency as they are generated at the batter head.

Tuning both heads the same gives you the maximum sustain and resonance, however for many drummers this may be considered too resonant without some form of treatment, it is however perfect for playing live and unamplified as your drums will sing and cut through the music.  The other instruments provide all the muffling you need.

A second option is to tune the resonant head to a higher pitch than the batter, this will give a slight pitch bend as the sound decays.  This bend is caused by the vibrations being reflected off the resonant head at an accelerated rate. 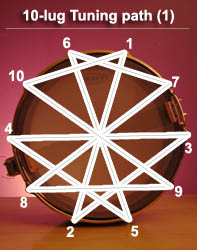 However it is not particularly discernible especially with toms 12” & smaller.  One of the features of tuning away from the same pitch as the batter head is a decrease in resonance.  The higher or lower you take the bottom head the less resonant the overall sound becomes. A third option is to tune the resonant head lower than the batter head.  This also gives a pitch bend.  This bend is more noticeable and is very clear on larger toms.  Again, the pitching down of the resonant head serves to reduce the amount of resonance or duration of the tone.

I use the same single ply heads (Remo clear ambassadors) as both batter & resonant heads, however putting a double ply head such as a pinstripe or one of the hydraulic heads on the batter side will give a lesser amount of initial resonance thereby damping the sound of the drum somewhat.  A resonant head should always be a single ply unless you want very ‘dull’ sounding drums. 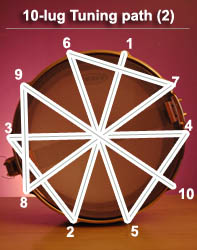 Really, the best way to find out what works best for you tuning wise and finding the optimum relationship between the batter & resonant sides for your applications is by experimentation.  Try different situations with & without musicians or with different musicians, see how each tuning fits your playing styles.  One kit can have a hundred voices if you have a drum key and a stock of heads.